Breeding plants in a world of plant patents and PBRs 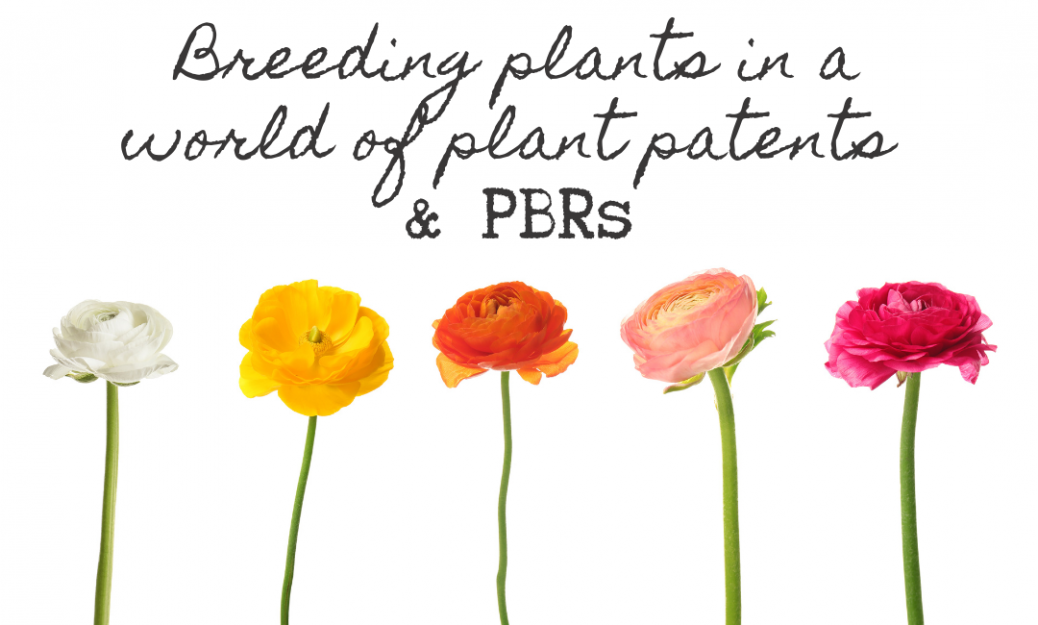 I honestly don’t recall how I came across the book “Flower Confidential: The Good, the Bad, and the Beautiful” by Amy Stewart. Its an older book now, first published in 2007. It may have been from my local flower wholesaler, but that part of this story is fuzzy.

The book is a must read for those in the growing flower-farmer-florist community. There are some great historical aspects to the flower industry that are helpful to understand WHY things are done the way they are. Because they often don’t quite make sense to me…I’m just taught the way that they are done. And one of the goals I have on my little adventure into flower farming, is to bring the experience, tools and gadgets from other industries and hobbies to my work in the garden.

Two things happened at the same time: I began reading Flower Confidential and I started research into my fall bulb purchases that weren’t done yet. Namely, ranunculus or Persian buttercups.

Through an outrageous and fabulous (you know who you are!) Instagram friend, I learned about a large bulb wholesaler broker that specializes in European growers. And honestly, aren’t all tulips these days coming from Holland? So I asked for an updated catalog. On their spring special for members of the cut flower association was a statement that I knew I would sooner or later run into: “ranunculus must be destroyed after the first growing season and may not be reused, replanted or sold.” The statement didn’t apply to all ranunculus, only certain varieties. But it was clear – the plant breeder rights (PBR) were being zealously protected, and even required a signed acknowledgement from the buyer.

So here’s where being a lawyer and a regulation nerd comes in. Sometimes I tuck the nerd back into my overalls. Other times, I grab out my dry marker and white board to whomever is in the room. This time, let me share with you on this blog some aspects of being a small grower and breeder in a big-ag world.

Returning to the book Flower Confidential (I think we should do a Floret Book Club BTW), Ms. Stewart starts off in Part I with breeding. And she starts her story with that of the only lily I know by name: Star Gazer. I love it for its scent. I love it for its huge trumpets of pure white with a fuchsia throat and character speckles. Stewart shares the back story of how the lily came to be a household name; the litigation and family fights over the propagation rights; and the patent. I won’t rehash the history of Star Gazer other than to use it as an entrée into the discussion of plants and patents.

Lets begin with the U.S. Constitution. I told you that this was nerdy! One of the enumerated rights in the document is protection for inventors. Article I (which lays out Congress’ legislative powers) section 8 (right after the power to establish post offices) states: “To promote the Progress of Science and useful Arts by securing for limited Times to Authors and Inventors the exclusive Right to their respective Writings and Discoveries.” Patents therefore are a pretty strong American ideal – to incentivize invention by allowing a period of production exclusivity to the inventor.

In 1930, House Representative Fred Sampson Purnell of Indiana and the “strawberry king” Senator John Gillis Towsend Jr. of Delaware introduced the Plant Patent Act to use this constitutionally protected right for inventors to incentivize private plant breeding affording the breeder protection from competitors for brief period. According to historians, even Thomas Edison lobbied in-favor of the bill.

Fast forward 25 years. In 1957, negotiations began in Paris on the International Convention for the Protection of New Varieties of Plants (known by its French acronym “UPOV Convention”). [Side bar – See, Model UN has a purpose!]. Why an international convention and how? Other books go into the history of it – but the major push comes from the differentiation between “farming” and “breeding” with the latter taking on a scientific and intellectual posture. And in the late 50s and early 60s, science was the IN fad! The Convention was ratified in 1961 affording similar protections to inventors living in the countries that signed on as were afforded to breeders in the United States.

Both the Plant Patient Act and the Convention have been updated over the years to reflect advances in technology and genetic understanding of breeding. Today, there are over 20,000 granted patents (many of which have expired). And the Convention has 71 nations as signatories. Protection varies but generally is for 20 years from registration.

The United States is a member party to the Convention with one reservation – the U.S. recognizes patents for breeders while the rest of the world recognizes plant breeders rights (PBR). Most intellectual property lawyers recommend breeders to apply for both if the plant will be distributed in the U.S. and other parts of the globe.

Back to my search for ranunculus asiaticus to grow in my garden. I wanted to understand the PBR disclaimer, if I was going to sign it. I started by searching for any U.S. patents granted with ‘ranunculus’ in the title. I found 28 total ranunculus patents for two different breeders – one in the United Kingdom and the other in Italy. The oldest of these patents was 2018, which means that the European breeders would have exclusive rights to clone these varieties until sometime after 2038 in the United States.

Down to the brass tacks – what does this signed acknowledgement mean for me as the buyer/grower? Both patent and PBR protections limit only the breeder to asexually reproduce (clone propagation) the variety of plant. Since ranunculus corms, that look like small octopi strangely enough, double or triple in number at the end of the season, the mother corm and daughter(s) are not mine to keep for these protected varieties. The breeder is instructing me that I must destroy it.

For cut flower bulbs that are treated as annuals, like tulips, this request isn’t such a big deal. Into the green waste bin they go. And ranunculus are not cold hardy. They don’t well with winter temperatures below 20 degrees Fahrenheit. So no matter what, I have to dig them up and store them over the winter; the same arduous process that I do for dahlias. Maybe this one season bulb restriction makes sense…for folks living in USDA Zones 7 and north.

But what if I decided to allow ranunculus to go to flower and breed them with the same variety, another protected variety or a non-protected variety? Plant patent protections prohibit asexual propagation, such as rooted cuttings, bulbette formation, rhizome division, etc. But what about seeds? Breeders file for a utility patent to protect seed production from competitors. Take for example Utility Patent 9,510,529: “The invention relates to the seeds of squash line PN301, to the plants of squash line PN301 and to methods for producing a squash plant by crossing the squash line PN301 with itself or another squash cultivar.”

I had heard about these patents when my family lived in Kansas in the late 1990s and the patented, genetically modified (GMO) Starlink® corn was pollinating nearby fields. Under utility patent protections, the plants and their seeds are protected by the patent owner and must be licensed to a grower, even when the parent is just a pollen parent carried by the wind. Aventis, the GMO corn patent owner, was threatening to sue the local farmers with fertilized corn for patent infringement. And you may recall the eventual outcome of how the windblown pollen ended up pollinating corn fields intended for human use, resulting in untested genetically modified cornmeal in a Taco Bell hard shell.

As and alternative to patent protection, some breeders create sterile hybrids. My late father’s favorite tomato, Jet Star, is a good example of this. I found records of 602 tomato varieties in the U.S. Patent Office database. But Jet Star F1 is not one of them. Developed by Joseph Harris Seed Company, and first listed for sale in 1969, the hybrid intentionally is difficult to obtain since it is a first generation (F1) hybrid. Unless you have the parent plant(s), you can’t make the seed plants with all of the characteristics and benefits of the initial hybrid. For the breeder, you control the parent plants and licensed growers. For the consumer, this is how we ended up with seedless watermelons!

Back to my ranunculus selection for the fall planting season: the patent owners for ranunculus interspecies hybrids and asiaticus varieties have a PLANT patent and not a utility patent thus legal limitations are only to asexual propagation.

With all this laid out, my options, in the United States, are:

One quick observation about ranunculus: you don’t see any escaped stands of these beauties along the roadside as you do “ditch lilies” and many other plants that have escaped our gardens. Ranunculus are notoriously fickle about germination, partly due to their diploid genetics, and partly due to stubbornness. This is likely why a utility patent for these growers was likely seen as unnecessary at this time.

Its not always easy to know if your seeds or plants are protected and your use of them limited. The Royal Horticultural Society (RHS) of the UK, does a great job in their plant finder database which puts into a parenthetical “PBR” to identify any variety that is protected in the U.K.

Some plant catalogs such as Burpee®, will identify in the description a protection, and when available, list the patent number (PP is the indicator for Plant Patents; assume all others are Utility Patents).

Other large scale seed producing houses, such as Johnny’s Seeds, will list the patent on the seed packets. However, they do not explicitly state that the grower is prohibited from breeding the seed as noted in these examples of Rutgers University’s research into improved basil. This is for Rutgers Obsession, Utility Patent 10,259,212, “Downy Mildew Resistant/Tolerant Sweet Basil Varieties”. They’re other patented basil varieties include Rutgers Devotion and Rutgers Passion, both covered under the original Utility Patent application.

And then some of my roses come with tags on the rose itself that states that propagation of this plant is prohibited.

I hope that this blog post is helpful. I’ll do a supplemental post to explain the differences, which are nuanced, between plant patents and plant breeders rights.

Thyme in a Bottle is a tradename of Searfoss & Associates. Copyright 2022. All rights reserved.